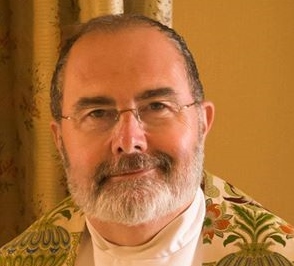 Feeling a bug coming on, Adelaide rushed to the pharmacy to pick up some medicine and upon returning to her car found she had locked her keys inside it. She ran into a nearby laundromat and got a wire coat hanger, but—try as she might—she was unable to get the car door open. In desperation, she prayed that God would send her help. Moments later, a big, burly, bearded guy roared up on his motorcycle. “Good Lord,” the woman thought, “is this who you’ve sent to help me?” With some trepidation, she approached the biker and asked if he could help her break into her car. He grinned a huge, toothy grin and said, “No problem.” Moments later, her car door was open. Thank you,” she said to her unlikely helper, “You’re an angel.” “No, lady, you’ve got that wrong,” he replied, “I just got out of prison for grand theft auto.” As she got into her car Adelaide exclaimed, “Thank you, God, for sending me a professional!”

Today we are celebrating the feast of St. Michael and All Angels. We Episcopalians don’t have a very well defined theology about angels and I’ll bet that some of you have never even heard of this feast. It’s a very ancient one, first observed in Rome in the fifth century and a hundred years earlier in the Eastern Orthodox Church. When Martin Luther reformed the church calendar, eliminating many saints’ day observances, he was intentional about retaining this feast of St. Michael and All Angels.

Our celebration today raises for us the question of how we talk about what we cannot see, what we sense and cannot touch. We may even feel embarrassed to consider the possibility of spirits or angels or demons much less have the language to talk about it. After all, we are twenty-first century intelligent people and we know that those are just old ways of making sense of aspects of superstitious beliefs and unexplainable phenomenon. Right?

But we do know the struggle between that which gives or takes life, that which brings good and that which brings evil into our world. Human beings have passed on stories and conjured up images in every age and culture to try to explain and conceptualize this struggle.

Today’s reading from the book of Revelations recounts the fight between the forces of good and evil; War in heaven: Michael and his angels against the Devil. Even though the Episcopal Church’s theology about angels is not very concrete, traditionally it has considered these heavenly spirits as companions on one’s life journey like when an angel tells Mary she will give birth to the Messiah or warns Joseph about the plot of evil king Herod to assassinate Jesus.

There are angels we celebrate today who have gained fame and familiarity because of their role in biblical history—Gabriel, Michael, and Raphael—of whom we sang in that great opening hymn. And there are angels we celebrate today who remain nameless and fameless except to the ones whose lives they have touched by their acts of kindness, faithfulness, and compassion. We’ve all known some. Not a few of them have occupied these pews.

I’m not sure that contemporary culture has helped the cause of angels. What it has given us is
a large variety of consumer goods that sentimentalize them. Yet there is an enormous gulf between the way popular consumerism depicts them and their authentic purpose in God’s realm and their relationship to the world and to us. Perhaps, as far as angels are concerned, it’s not so much about belief but about imagination—that wonderful capacity of human beings to envision new, even other worldly realities.

Children are experts in the realm of the imagination. They can drape towels over their shoulders and be instantly transformed into kings and queens in ermine capes with crooked aluminum foil crowns atop their little heads. They have this natural ability to use all their senses and to see a world full of wonders where we adults typically see only stark reality.

The blessing of childhood is that rare gift to be able to surrender your certainty that you already know what everything is for and approach each thing you encounter with awe and amazement. Adulthood often brings with it the loss of that gift. This great festival of the angels is a reminder that we need to rekindle the God-given capacity for imaginative thinking. It was that gift that enabled Nathanael to recognize Jesus as the “Son of God” when he had no proof for making that declaration other than the hope of his wildest dreams. To believe is itself an imaginative act.

Author Megan McKenna in her book Angels Unawares writes: “Perhaps we can best describe angels by what they do than by how they look. Angels instill in those who see or hear them a powerful need to obey the truth….the presence of the holy exudes from them…Angels are evidence that God is taking notice of us.”

The story of the great war in heaven may seem far-fetched or unbelievable fantasy for many but the great war we know here on earth is not. Like the battle between Michael and the dark spirits, it is centered around alienation and the determination of the powers of evil to triumph over goodness. Human institutions of all kinds are still directed by malignant spirits in their relentless efforts to alienate and dehumanize.

A huge yet crucial challenge for humankind is the ability to discern the spirits that inhabit those institutions and, in God’s name, cast them out. Can we also identify the angels that hold us together as self-giving, hopeful, truthful, compassionate, and faithful to God’s passion for all-inclusiveness, for mending the broken and healing the wounded?

And what about the angels on your life journey? I’ll bet most of us have at one time or another run into one whether or not we have recognized her or not. Just as Jacob experienced God’s presence in his encounter with the angels, I believe that God continues to give us those out of the ordinary encounters through which God allows us to have a revelation we may need in order to recognize the truth.

I’ve shared this story before but I think it is worth a retelling. The late Alexander Schmemann, a distinguished Russian Orthodox priest and theologian, once told a group of students why he believed in the existence of angels.

When he was a young man studying in Paris, he was traveling on the metro one day with his fiancée. They were very much in love and bound up in each other. The train stopped and an elderly, unattractive woman got on. She was dressed in the uniform of the Salvation Army and she sat near them. The two began to whisper to each other in Russian about the grossness and ugliness of the woman. The train came to a stop. Remember, they are riding on the metro in Paris. The old woman got up and, as she passed the two young people, she said to them in perfect Russian, “I wasn’t always ugly.” That, insisted Father Schmemann, was an angel who taught him that this human being was much, much more than an ugly old woman. She was a beloved child of God.

So, be on the lookout for one. From time to time when we need one, God does send us a professional. Angels are evidence that God is taking notice of us. Just imagine that!