A Sermon preached by the Reverend Peter Thompson 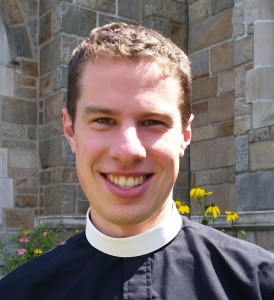 Take our lives and let them be
Consecrated, Lord, to Thee;
Take our moments and our days,
Let them flow in ceaseless praise. Amen.

Prayer: it’s a sensitive subject that can elicit strong opinions. For some, prayer is the lifeblood of everyday existence: what you say when you get up and when you go to sleep at night, what you mutter sheepishly before taking a bite of your Chicken Caesar Salad or what you proclaim proudly before your algebra lesson at school. There are people out there who can’t imagine going for a short drive or beginning an important meeting without crying out to the Lord Almighty, and who wouldn’t dream of moving into a house without first plastering cross-stitched prayers all over the walls. For others, though, prayer is foolish and even dangerous, the archetypal example of irrational and fanatic religious delusion. In prayer, these people see not admirable devotion, but ridiculous make-believe, fuel for cult-like brainwashing, and the shameful imposition of personal convictions on others.

Even among those who think prayer is a good thing, there are countless debates about how to do it properly. Should you address the Divine as your Best Buddy or as the Queen of England, complete with thees and thous and “we beseech you, O Lord”? Should your prayers be carefully crafted and written down or spontaneous and conversational and free? Do you pray in a sheltered building with stained glass and candles or outside, in God’s good creation, wherever you may be? Can you pray for someone sick to get better or can you only pray that God’s will be done? These queries may seem frivolous and gratuitously academic to you, but get some seriously religious people together to discuss them and I guarantee some fires will start.

This is all to say that when the disciples ask Jesus to tell them how to pray, they are asking no small thing of him. This issue of how to pray—or indeed, whether to do so at all—has divided people for as long as religion has existed—in other words, for ever. And Jesus’ response, in turn, is no safe and gentle meditation suitable primarily for your daily devotional. True, Jesus starts by providing his disciples with a scripted prayer, the stately, thorough, poetic Lord’s Prayer that would later be said by Christians across the centuries and around the world. But he goes on to paint a picture of prayer that is even richer and more expansive.

He does this by telling a story—a story of a man in need begging in the darkness of midnight for assistance from his reluctant friend. It’s a subtle, open-ended story of asking, searching and yearning, a story that places the timing of any response to prayer solely in God’s hands. Eventual resolution to whatever problem a prayer presents is promised, but only in a distant future, unnamed and undefined. The friend will get up and get the man whatever he needs, we learn. It will be given you, Jesus says. You will find. The door will be opened. Prayer, as Jesus depicts it, is by definition incomplete and unfinished; the results of its efforts are necessarily out of reach and out of sight. Who knows how often you will have to keep asking? Who knows how long you will be required to knock before your friend gets up and answers? To pray, it seems, is not to hold on with absolute trust, convinced that your every desire will be satisfied the moment you give utterance to it, but instead to take an uncertain leap into the precarious unknown.

I woke up on Friday morning to write my first draft of this sermon, which I had initially planned as an extensive dissertation on the nature of prayer, the future of the mainline church in a new millennium and a whole host of other very important issues. But as I noticed the ninety-degree-plus temperatures forecast for this morning and contemplated all the ways in which violence and hate had manifested themselves in the news over the past few weeks, I realized that it was no time for overworked theory and oblivious navel-gazing.

So, knowing I had to try something different and unsure of how to begin, I procrastinated, and eventually, as I lounged on the couch, I happened upon a profile of the philosopher Martha Nussbaum in this past week’s issue of The New Yorker. The whole piece was fascinating, but I found myself especially drawn to one particular sentence, in which this quote of Nussbaum’s appears: “what I am calling for is a society of citizens who admit that they are needy and vulnerable.” As I read that sentence, I thought—that’s it! That’s what Jesus in his teaching on prayer is trying to get us to see—that we are all needy and vulnerable, that our happy endings are not achievable through our own means, that as human beings we are constantly reliant on something or someone greater than ourselves. And despite—indeed, because of—our neediness and vulnerability—in the midst of all the death and violence we see on our streets, in response to the bloated and divisive rhetoric that bombards us on our screens, through the uncertainty of the future ahead—Jesus teaches us to keep asking, to keep searching, to keep knocking, to keep praying.