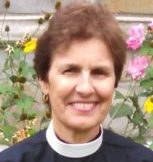 Sermon preached by the Reverend Louise Kalemkerian
St. Paul’s on the Green, Norwalk, CT
The Second Sunday after Pentecost (Track 2)

A week ago, I was standing on the shore of the Sea/Lake of Galilee, albeit on the opposite shore from that mentioned in today’s Gospel.  The Sea of Galilee is actually a lake, not a big one at that, 7 miles wide and 14 miles long.  That was one of many new learnings from my pilgrimage, my first trip to the Holy Land.  I waded in the lake along with numerous others.  I did not walk on the water.  Maybe I’ll learn that on my next trip.

Our Gospel today follows immediately in Luke of Jesus’ calming of the storm on the same lake. This story is a significant one, because it also appears in Matthew chapter 8 and Mark chapter 5. To the gospel writers this is an important account, it describes something that actually happened.

When Jesus calmed the storm, his disciples, terrified in their swamped boat, had shouted, “Master, Master, we are perishing!” And then, a miracle: at a word from Jesus, the howling wind and raging waves had quieted. The disciples, astonished, no doubt murmur words of thanksgiving as they land the boat on the far side of the Sea of Galilee.

As they turn from the boat, they see a new threat. Stumbling toward Jesus is a naked stranger with wild, desperate eyes. The windstorm on the lake has quieted, but now they face an even more terrifying spiritual storm: a man possessed by demons.

Although today’s story seems fairly direct at first, simply another old account of a miraculous healing, if we could ever describe such an event as simple, we learn quickly that it is much more than that. It involves a story of a tormented Gentile who hangs out in cemeteries near a herd of pigs.

Immediately we sit up and takes notice: this is not an ordinary Jewish tale. The Gerasene man in Jesus’ story wore no clothes and lived among the tombs instead of in a house. He was considered ritually unclean and shunned by the community. He lived in isolation, loneliness — not unlike some persons with mental illness.

Gentiles, the dead and swine are remarkably and famously unclean for devout Jews. Naming the disturbed man “Legion,” often erroneously thought to reflect the preponderance of demons in him, was in fact to employ another connotation of the word

Rome’s notorious army was often called Legion. And so with just this little bit of historical perspective, we can see that this story of what might appear to be an account of individual salvation actually bears heavy overtones of revolution and liberation. The Romans were oppressive. Jesus healed the inner chaos and brokenness of a man crazed by the effects of violent Roman occupation on his physical, material, and also spiritual situation. The Gospel writers tell this story to show that the despised Romans would not, in the end, rule the day, and even more astonishingly this good news was not just for Jews but for Gentiles as well.

Interesting enough, I hope; but what on earth does this story, specific to that time and place, have to say to us? Or why do we care about it in our context? Certainly our view of God’s people is obviously much wider than that of Jesus’ Jewish contemporaries — not as wide as we like to claim it to be, but we certainly comprehend the wideness of God’s love and rarely think about those who are “in” and those who are “out.” Right?

After all, our understanding of mental illness is much broader than that held in the first century — we rarely speak of demons in a serious sense anymore.  We speak of schizophrenia and bi-polar disorder and other mental illnesses, which we almost fully understand and which we always successfully treat with drugs — except when we don’t or when the poor soul can’t afford them. There is certainly no stigma about mental illness in our culture. Right?

And we are not really in need of liberation, living freely as we do, unencumbered by systems or forces that govern our lives or hold us hostage to shackles that we’d like to break. That occasional sense — well, maybe it is a bit more often than occasional — of being on a merry-go-round from which there seems to be no easy exit only occurs because we are momentarily tired. Right?

Hmmm. Well, on second thought, maybe this story is not so distant as it seems. In fact, it could be my story, and my guess is that it could be yours. I don’t admit to having many demons. But on further thought, refusal to admit them doesn’t mean they don’t exist.

I have felt on occasion the desperation of this poor man, so vividly described in Luke’s passage. “For many times it had seized him; he was kept under guard and bound with chains and shackles, but he would break the bonds and be driven by the demon into the wilds.” I have known the demons of worry and anxiety, of depression and fear, of insecurity and inadequacy, and have been in fact seized by them on occasion when no amount of prayer or straight talk seemed to make much difference. Maybe you have known these in your own lives.  From my perspective these “demons” appear to be widely experienced in the human condition.

And while this story is about the healing of one person’s illness/demons, there are communal/systemic demons which are part of our culture and reality. My experience as the child of a survivor of the Armenian Genocide informed all of my encounters on my trip. And the lens through which I looked, and always look, particularly at those who are marginalized or repressed.

On this pilgrimage, I saw firsthand the demons of colonialism and occupation. The Episcopal Church’s presence in the Holy Land is a result of 19th century English colonialism. At the same time, the Episcopal Diocese of Jerusalem does amazing and wonderful things including owning and operating 16 schools, two major hospitals plus a number of clinics and several residential and outpatient institutions for those with disabilities.

I also felt the demons of exile and refugee status. When one country occupies another, unfair treatment abounds, including no mail delivery or garbage pickup in East Jerusalem.  Then our treatment of Native Americans jumped out at me when I realized American colonialism is part of our own ugly history.   And our treatment of migrants today, as we separate families and banish people to concentration camps.

And of course, we, all of us, suffer the demons of racism and inequality in our country, from housing to schools to policing to incarceration. Demons are definitely systemic as well as personal. And these shared demons need Jesus’ healing touch as well.

After this encounter Jesus sets sails back home again. Which may mean that the whole trek across a stormy sea and turbulent run in with townspeople was all in order to meet this unclean man possessed by an unclean spirit living in an unclean and forsaken environment.

All of which suggests to me that God will go anywhere to go to reach and free and sustain and heal those who are broken and despairing.

There is no place on earth that is God-forsaken. More importantly, there is no person that is God-forsaken. Unclean. Outcast. Abandoned. Unpopular. Incarcerated. Unbeliever. No one is left out. Consider, there is no indication that this Gentile man later became Jewish or, for that matter, Christian. He wants to follow Jesus, but Jesus sends him back home with the instructions, “Go and tell what God has done for you.” Jesus sends the man to his own people—the very ones who had excommunicated him —to be a living witness to Gospel power. In so doing, the healed man becomes the first evangelist to the Gentiles.

Jesus comes to challenge and cast out every power that prevents us from living fully and freely as human beings created in God’s image. Those whom Jesus has healed and freed know that his liberating love is indeed good news, the gospel that he commands us to proclaim throughout our cities and towns. God is still at work in Jesus, through you and me, bringing God’s kingdom on earth, as it is in heaven.