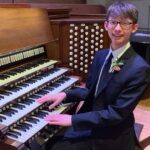 Ethan Haman from Fremont, CA, is the organist and assistant conductor at Noroton Presbyterian Church in Darien, CT, and organist at Yale University’s Marquand Chapel. He completed a Master of Music degree in Organ Performance in 2021 at the Yale School of Music and Institute of Sacred Music studying with Jon Laukvik and Craig Cramer. He is currently attending Yale for one more year pursuing a Master of Musical Arts degree in Organ Performance, studying with Martin Jean. In 2019 he graduated with a Bachelor of Music degree from the University of Southern California, where he double majored in Organ Performance studying with Cherry Rhodes and in Composition with Morten Lauridsen, Andrew Norman, Donald Crockett, Sean Friar, and Daniel Temkin.

The USC University Chorus commissioned and premiered his choral compositions for several performances in recent years. The American Guild of Organists commissioned Ethan to compose and premiere his “Toccata on Hyfrydol” at Christ Cathedral Arboretum in Garden Grove, CA for their 2019 West Region Convention, and he enjoys teaching improvisation both privately and in workshops for the AGO’s local chapters. His “Southern Harmony Suite” was commissioned by the AGO and premiered by Abraham Wallace as one of four winning proposals for the 2020-2021 Student Commissioning Project. Scores for Ethan’s compositions can be found at SheetMusicPlus.com.