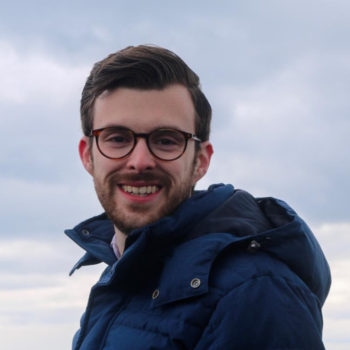 You wake up while it’s still dark, and rub your bleary eyes. They’re raw and a little puffy from crying yesterday. Stretching, you drag yourself out of bed and walk into the other room where the others are sleeping. “Wake up, it’s time,” you whisper. As they rouse themselves from their sleep, you take the spices prepared the night before, and then together walk out into the early morning twilight.

You walk in silence, weighed down by weary grief. Passing a hill you glimpse three crosses still looming against the blue-black sky. You look down, walk a little faster. It’s quiet, almost too quiet. Eventually you arrive at the tomb, but something isn’t quite right – the sun still hasn’t crested the horizon but as you approach you realize not everything is in the same place as it was before. The stone has been moved. Confusion springs from your weary soul but you quicken your steps and arrive at the entrance to the tomb where you linger for a moment and then peer inside. There is no body. There is no body. Confusion turns to fear.

You turn to Joanna and Mary but before you can speak two men appear. But they aren’t just men – they can’t be, their aura’s are…different. Their voices ring out into the stillness of the morning: “Why do you look for the living among the dead? HE IS NOT HERE. HE IS RISEN.” The words ring in your ears – HE IS NOT HERE. HE IS NOT HERE. HE IS RISEN – cascading through your being as the strange men go on – remember, they said, remember, how Jesus told you he’d die, and then on the third day rise? You count the days. It’s the third. And you remember. You remember what your friend had told you and at that moment the sun breaks over the horizon as dawn breaks in your heart. You look at Joanna and Mary again and they’re staring at you with this expression of awe mixed with fear, and their eyes- their eyes are full of that realized hope that only God can fill them with, and that’s when you know – you know that everything you’ve ever known, everything about your life – has changed forever.

This is the night we remember how God has worked for the salvation of God’s people since the beginning of time – moments when God has acted and everything has changed. This is the night we remember that – remember the God of Israel who looks at slavery, exile, death, unimaginable suffering and says: Be free. Come home. Live. Now is not forever. I will bring you out of Egypt. I will bring you back from Babylon. I will raise you from the dead. I will take your darkest moment, your darkest hour, and make it dawn.

This is the night we remember how God gathers shattered hopes, hopes that have died in foreign lands and on crosses, and puts the pieces back together. Who refuses to give up on humanity again, and again, and again, working in the midst of impossibility so that we might walk in newness of life where before only death and destruction reigned.

This is what the women discovered when they arrive at the empty tomb that first Easter. They discovered that God had acted again, this time by defeating the only tool evil can threaten life with in any final way – death.

Like those women, the entire meaning of our lives is changed by the resurrection. Without it Christianity is just a good idea – a set spiritual guidelines on how to live a “decent” life. But when Jesus walks out of that tomb, his ministry – and ours – gains a new dimension.

Resurrection is not abstract. It is the gift of a new kind of life that exists on the other side of the death and destruction of this world. The death we die instead is the one Paul speaks of in Baptism, and when we emerge from our watery tomb united to Christ, we have risen into a new life where sin, suffering, and death do not get the last word. God gives us another way: freedom to say, “death no longer has dominion.”

This new reality, this gift of a new life through the resurrection of Christ empowers us to live more boldly into our baptismal covenant.

Is the lifeforce that enables us to continue in the apostles’ teaching and fellowship, generation after generation.

To persevere in resisting evil when it presses in on all sides and demands our surrender.

To risk proclaiming by word and example the Good News of God in Christ rather than remain silent.

To seek and serve Christ not just in familiar, comfortable faces but in all persons, loving our neighbors as ourselves.

To strive for justice and peace among all people of and respect the dignity of every human being in a world maligned by injustice and violence.

To have the audacity to love friend and foe, neighbor and enemy.

Because of the resurrection, we claim the truth that the light of Christ will always pierce through the darkness of our world. And when that truth is out of sight, it gets you up at the crack of dawn anyway to go to the tomb where your hope has died, knowing full well that what you seek there is dead, but going anyway. Maybe you’ve shown up more than once, hoping beyond hope for a miracle behind that big stone blocking the entrance.

And then one morning, that stone is rolled away. You don’t know what to make of it, so you draw near. And then you realize what the women realized – he is not here. He is risen. You see what has happened and you turn, leaving the tomb behind, towards the early morning sun. Its warmth promises a new day, new possibilities, new life. Because Christ has risen, and you know that everything has changed.

Categories: Sermons
Remembering – Maundy Thursday 2019
On Which Side of the Tomb are we? – Easter Sunday 2019