“Letting the Anchor Down” by Fr. Daniel 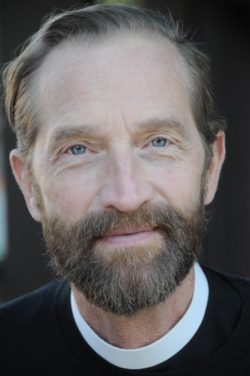 Over the past several weeks, I’ve been part of several conversations across the range of the political spectrum. The sides have convictions that run deep, sometimes even hot. In one conversation my friends remarked that they were fine with political differences, but that politics did not belong in church.

I am deeply familiar with this point of view. I grew up in a family that did not vote. We believed that the second coming of Christ would likely occur before I reached adulthood. We quoted scripture that God’s kingdom was not of this world (John 18:36), meaning that spiritual life pertained only to the piety of the heart and to the afterlife. We never discussed, or were much aware of, current events or political issues.

The Episcopal Church presented a striking alternative when I discovered it in college, and I was blessed to enter through a parish (St. Barnabas, in the western suburbs of Chicago) that had a deep and lively spiritual practice, and robust political conversations. They taught me that the hallmark of Jesus’ ministry was exactly the opposite of what I had grown up with. I learned that the Kingdom of God was a way of describing the deep reality of the world — both what our highest calling is, and what already impregnates every level of existence: relationship (love), producing the fruits of justice and peace.

In this sense the teachings of Jesus are deeply political (The root of the word “politics” is the Greek word polis, which simply means “city” — politics is about the values that order a whole community’s life together.) Jesus invited people to change their direction and pay attention to and participate in what God was doing to bring true justice and deep peace into the community, and to avoid the disaster that would inevitably ensue if they kept on their path.

But the politics of Jesus was not partisan. He did not join a side and campaign for it. Winning was not his interest. Rather his politics was rooted in the more ancient and comprehensive insight of the prophets. Prophets in the Hebrew tradition were never apolitical, and yet they always transcended partisanship. They tended to target the corrupting influences of power for whoever held it. Amos used a plumb-line as an object lesson to how God’s justice couldn’t be skewed or bought. The prophets cut against the grain of every political stripe in their culture, prioritizing their alternative vision for how the polis could best flourish together by centering the marginal and breaking down false differences.

I mention this because as we head into the heat of election season, while we all will, I hope, exercise our right and privilege to vote for a particular candidate and party, our call is to do so rooted in our deepest moral and ethical values, with the same plumb-line energy of the prophetic vision. Rooting this way will help ground our souls, and will allow us to see more of the big picture, beyond any particular partisan outcome. Our Presiding Bishop, Michael Curry, recently released a Word to the Church where he speaks pointedly and compellingly to this need and opportunity. I commend his words to your reflection. (Click here to listen to Bishop Curry’s sermon.)

Sometimes ships let down their anchor in the depth of the open ocean. The anchor can’t touch the bottom, so is useless in itself, but the weight of the chain lowers the ship’s center of gravity and stabilizes it in rough seas. Hold that image, or the image of the prophet’s plumb line, close to you this season of choppy seas. Commit to whatever practice grounds and stabilizes you (daily meditation and prayer is a good start — St. Paul’s offers it at 8:30am Monday-Friday — join in!).

Your vote matters — so does your non-anxious, prayerful, grounded, prophetic presence. The Spirit is moving powerfully in these days in many ways and places, including through us!

Yours as we vote, and pray, faithfully.

Categories: Weekly Reflections
Mask Ministry at St. Paul’s
“One Person at a Time” by Ginny Balser