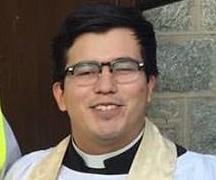 Blessed, praised, and adored be our Lord Jesus Christ on his throne of Glory and in the hearts of his faithful people. Amen.

Now if you’re anything like me when someone tells you not to worry or to not be afraid, I cannot help but become a little suspicious. While I don’t often panic in most situations, the slightest fragrance of false certainty causes me to question how good things really are. And if I was one of Jesus’ first disciples, living and following Jesus in the flesh, I don’t know how I would have reacted to hearing that four letter phrase “Do not be afraid.” And my cause to question my reaction has nothing to with Jesus but with the world that would have surrounded me.

So to hear Jesus say the words “Do not be afraid,” does not make me question the greatness of God in Christ but the greatness of the world I live in. It makes me question the world around us. A world that is so often made up of forces solely concerned with greed and power, that they are willing to anything in the name of it; even at the expense of human lives. Do you blame me if I ask how is it possible not to be afraid?

But what follows Jesus’ remarks to not be afraid is important for one to live a life not rooted in fear of the world around. Jesus says, “ Sell your possessions, and give alms… For where your treasure is, there your heart will be also… Be dressed for action and have your lamps lit… You also must be ready, for the Son of Man is coming at an unexpected hour.”

Jesus’ command to be ready as a servant waiting for his master to arrive or as a homeowner preparing himself and his home for the attack of a thief is a call for us to be ready here and now in this world; at this very moment. Yes, the Son of Man will return at an unexpected time but that is no excuse to not be prepared to face the challenges of this world head on and in real time.

While we are promised that Christ will one day return for Jesus there is no good reason for us to defer on the problems of this world until his arrival. Jesus himself tells us to be ready: to be dressed for action and to have our lamps lit. Dressed with the mantle of Christ, a mantle soaked in prayer and mercy, we are called to be present in the very world Jesus himself was present in. We are called to be present in the very moments of human suffering and pain Jesus was present it. With lit lamps we are called to walk in this world shining light on the inequality and injustices that plagues our world.

To be ready means to be prepared to stand firmly with Christ clothed for action. Now I say this with caution because for some standing firmly with Christ means discriminating in the name of Christ; using religion as a front for their own bigotry and hatred.

No, standing firm with Christ means standing up for all people, regardless of who they are or what they might believe in. And in these deep moments of our human condition, when we put ourselves on the line for others, whether it’s out of a conviction for justice or out of the greatest gift of all — love — we know that God will be with us. For just as God did not abandon Christ on the cross, our God will not abandon us.

So when Jesus tells Peter and the disciples to not be afraid, this is not like a parent trying to reassure their child in a scary situation or a person trying to calm down their friend by telling them that everything will be all right. No, Jesus is telling us to not be afraid for he will be there when we face the challenges of this world, whether we are doing so for ourselves or for others.

While fear will always be real, and evil and sin will always surround us, the glory of God and the triumph of Christ will be there to clothe and guide us. Amen.