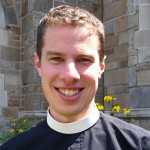 Take our lives and let them be
Consecrated, Lord, to Thee;
Take our moments and our days,
Let them flow in ceaseless praise. Amen.

A number of years ago, the magazine The Advocate published an article about a certain fashionable Episcopal Church somewhere in midtown Manhattan. The author of the article seemed quite puzzled by the fact that this church, which had an at best mixed record when it came to LGBT issues, was full of gay men. So he asked one who had recently stopped going there why this might be the case. The man he asked pointed to the stunning architecture, elegant liturgy and impeccable music of this particular church and told the reporter, “it’s probably the same reason the gay men go to the opera…simply put,” he went on to say, this church “does the best spectacle in the world.”

And though not all of us identify as gay or as men, and though we sit this moment not among the gleaming shops of midtown Manhattan but nestled next to the dark green of Norwalk, I suspect that one of the reasons that at least some of us are here tonight is that all of this is a pretty good spectacle. When it comes to thrilling music and powerful drama and impressive special effects, the Great Vigil of Easter is awfully hard to beat. We start the evening fully in the shadows of the recently arrived night, surrounding a roaring fire. We light all of our candles from a single massive flame that we process through the dark old Church. We sing an ancient song that has been proclaimed every year for centuries and centuries. We retell the soaring sweep of history, from the very first spark of creation to the miraculous rising of a human being from the dead. We sprinkle ourselves with water to remind ourselves of promises we never even remembered making. And eventually all the lights go on and those of us in fancy clothes pull out all the stops to give you the Grand Finale that will keep you talking the day after tomorrow. Easter Vigil has all the excitement of a Verdi opera or a Broadway show, but you get to keep your 200 bucks—although of course we wouldn’t mind taking that too.

The danger in making Easter Vigil your entertainment for the evening, however, is that you might think it all ends once you leave the reception and get in your car to travel home. You’ve made it to another Easter again, you’ll think. You can get out the chocolate or the television or the wine or whatever it is you’ve been hiding away for forty days. You won’t have to sing those dreary Lenten hymns again until next year. You’ll belt out Jesus Christ is Risen Today tomorrow morning, head off to Easter brunch, do an Easter egg hunt with the kids, and then enjoy a tasty ham for dinner. The resurrection will be little more than the ending to a story that finished almost two millennia ago–-a nice story, a story you like and claim as your own, a story you celebrate with enthusiasm every year, but a story that isn’t terribly relevant to you in terms of how you live your life right now.

But the resurrection was never intended as the climax of Christianity, the epic tying up of all the loose ends of human evil and fallibility. In fact, many of us ignore that most of the New Testament happens after Jesus was risen and supposedly solved all our problems by defeating death forever. The Acts of the Apostles, the letters of Paul and Peter and James, the Revelation to John the Divine—these works and others all reflect what happened after the empty tomb. Jesus may pull the rabbit out of the magic hat at the resurrection, but the authors of these works make clear it is not yet time at that point to close the curtain. They detail a long sequence of triumphs and joys and sorrows and setbacks that persists in the plot far past the protagonist’s final hurrah. But we don’t spend as much time with their trials and journeys as we do with Jesus’ because their tales are messier, not as easy to digest and understand, and more than a little incomplete.

Yet not even the story of Jesus is as straightforward and polished as we might sometimes assume. The Gospel accounts of the resurrection are riddled with moments of puzzlement, uncertainty and insecurity. Tonight’s account from Luke hints at this over and over, mentioning the women’s terror and perplexity and emphasizing how the male disciples refuse to believe them. There are other stories of resurrection in the Gospels after the main episode, such as the encounter two of the disciples have with Jesus on the road to the Emmaus, the breakfast Jesus has with some of the disciples on the seashore, the opportunity Thomas has to put his hands in Jesus’ side, and of course Jesus’ ascension into heaven—but none of these stories wrap things up as neatly in a bow as we would wish, providing us with a full and completely satisfactory conclusion. The feeling that the Gospels give you is overwhelmingly one of a story that continues.

The beautiful musical Children of Eden serves as a modern retelling of the first nine chapters of Genesis, chronicling the history of the world from creation until the restoration of the world following Noah’s flood. The musical conceives of the first nine chapters of Genesis as a dance between human beings and God, as they both gradually learn to live with each other and human beings figure out where they fit in the world God has made. The human beings and God have had their fair share of conflict, but by the end of the show, they are ready to make a new start. After God has destroyed most of the earth in the Flood, he agrees to loosen his control on humanity, and the human beings, for their part, realize they have to make more of an effort on their own. And so together they sing a song called “In the Beginning.” At the end of a show that started with the beginning of everything, they rejoice not in the completion of a masterpiece but in a chance to start all over again.

When you think about it, that’s most of what the Bible is—a series of new starts. Every time you think you reach an ending—whether it’s the last raindrop of the Flood or the final step of the Exodus or Jesus’ majestic rising from the dead—it all beings again. And this liturgy tonight offers us a chance to begin again in a world so filled with hate and violence, a world that now as much as ever needs a new beginning. The proclamation of Alleluia we make this evening is not the grand victory lap of our long liturgical journey. It’s an invitation to the fresh commencement of something entirely new.

So let’s not hold back. Let’s not linger at the empty tomb for too long. The dark night is fading away and the bright dawn is starting to appear. It’s time to wake up. It’s time to begin.